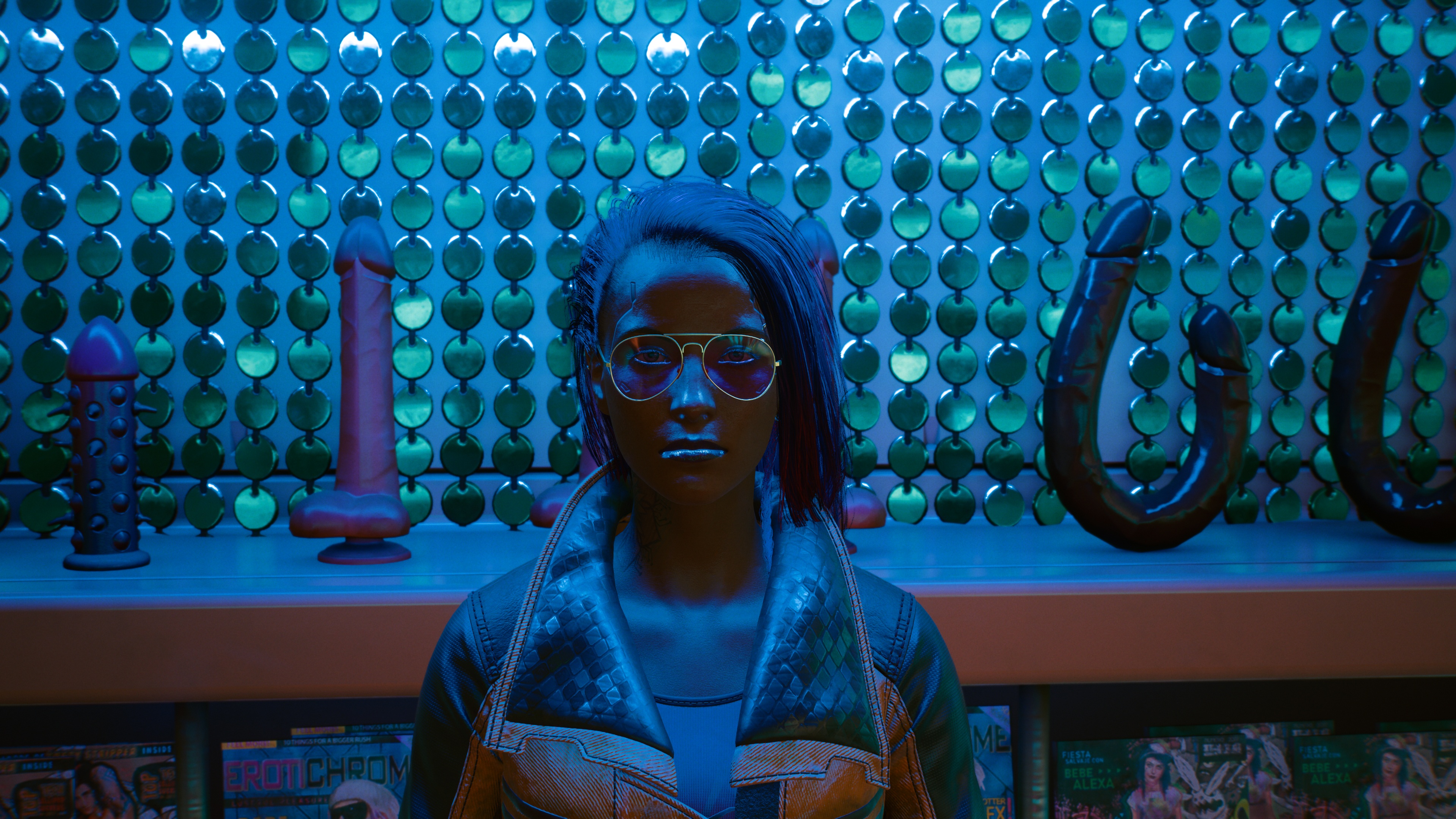 Picture the scene. You’re building an open world game, and you only have the resources to create a finite number of interactive props for the buildings and streets. These are props the player will see often, because they’ll constantly be looking for them. Picking them up adds them to inventory, where they can then be disassembled to obtain components for the game’s crafting system.

These items are important. But they’re also mundane – other props include things such as decks of playing cards, ash trays, or scissors. Resources are tight. What items the artists will create has to be carefully considered. 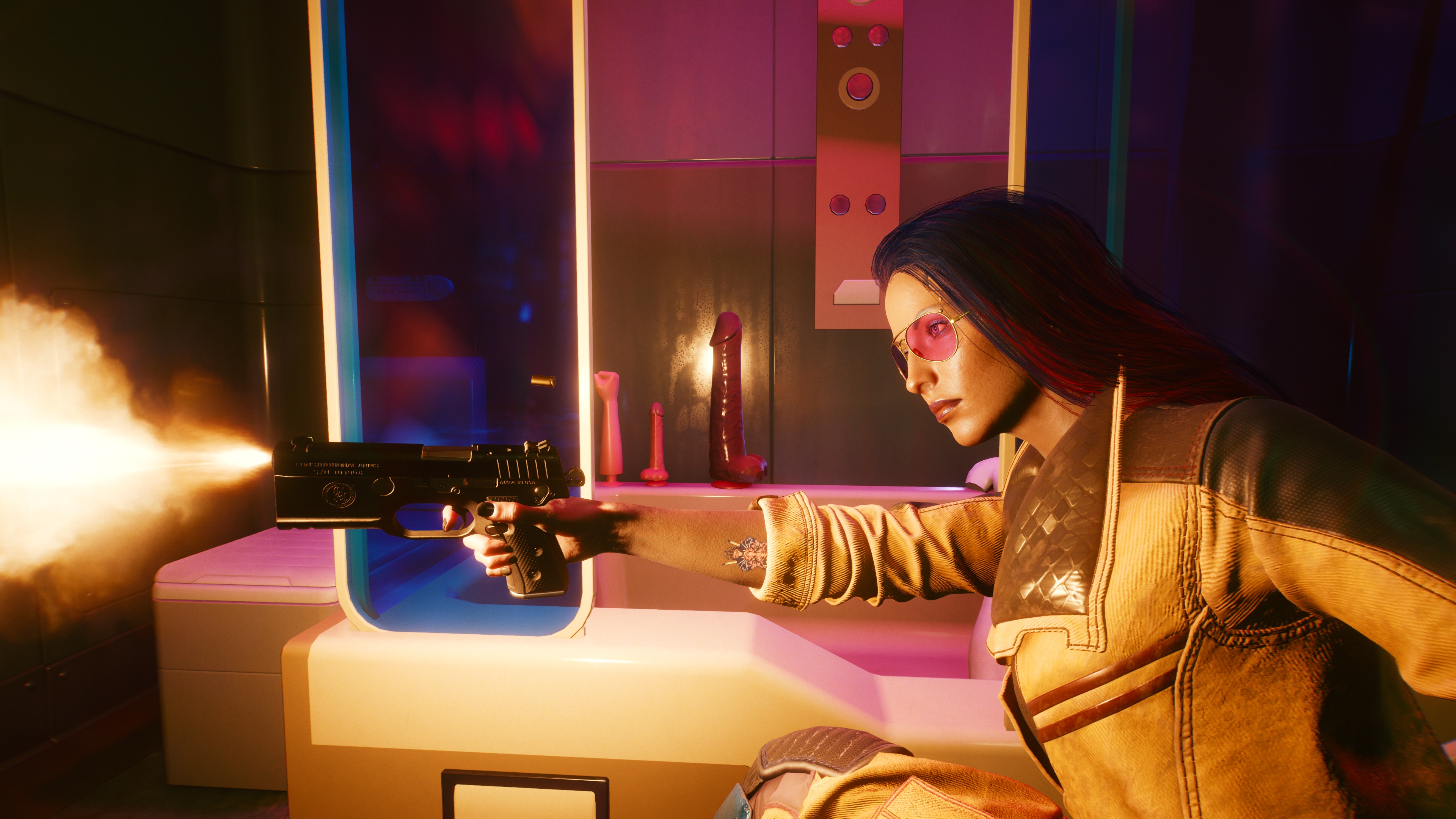 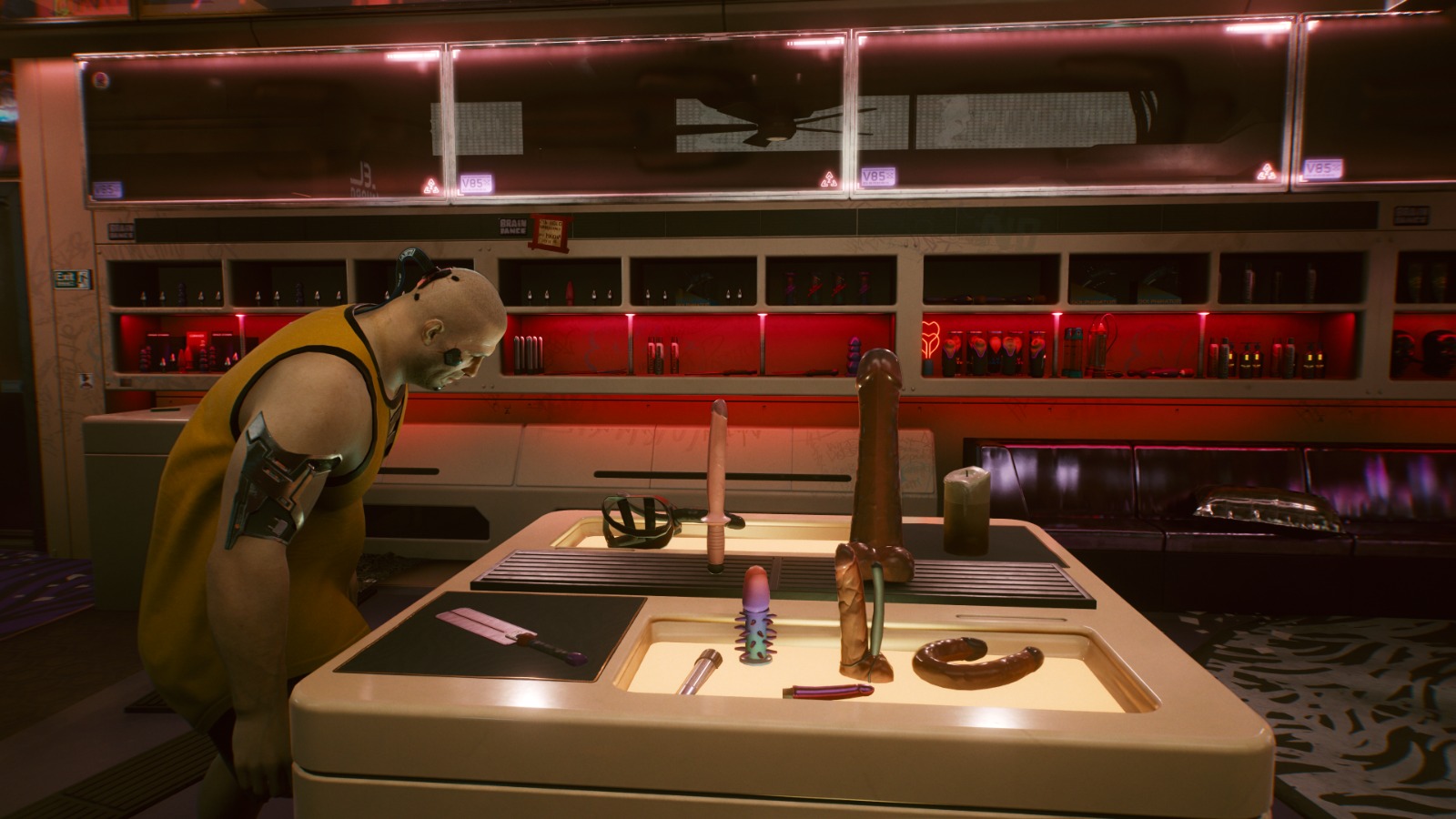 Sometimes they’re in places that make sense. Walk into a sex shop and there’s walls of them, alongside other similar products. But they’re also in loads of places that don’t strictly make sense.

I became fascinated by these props, a presence even more constant in Cyberpunk 2077 than Keanu Reeves’ Johnny Silverhand. 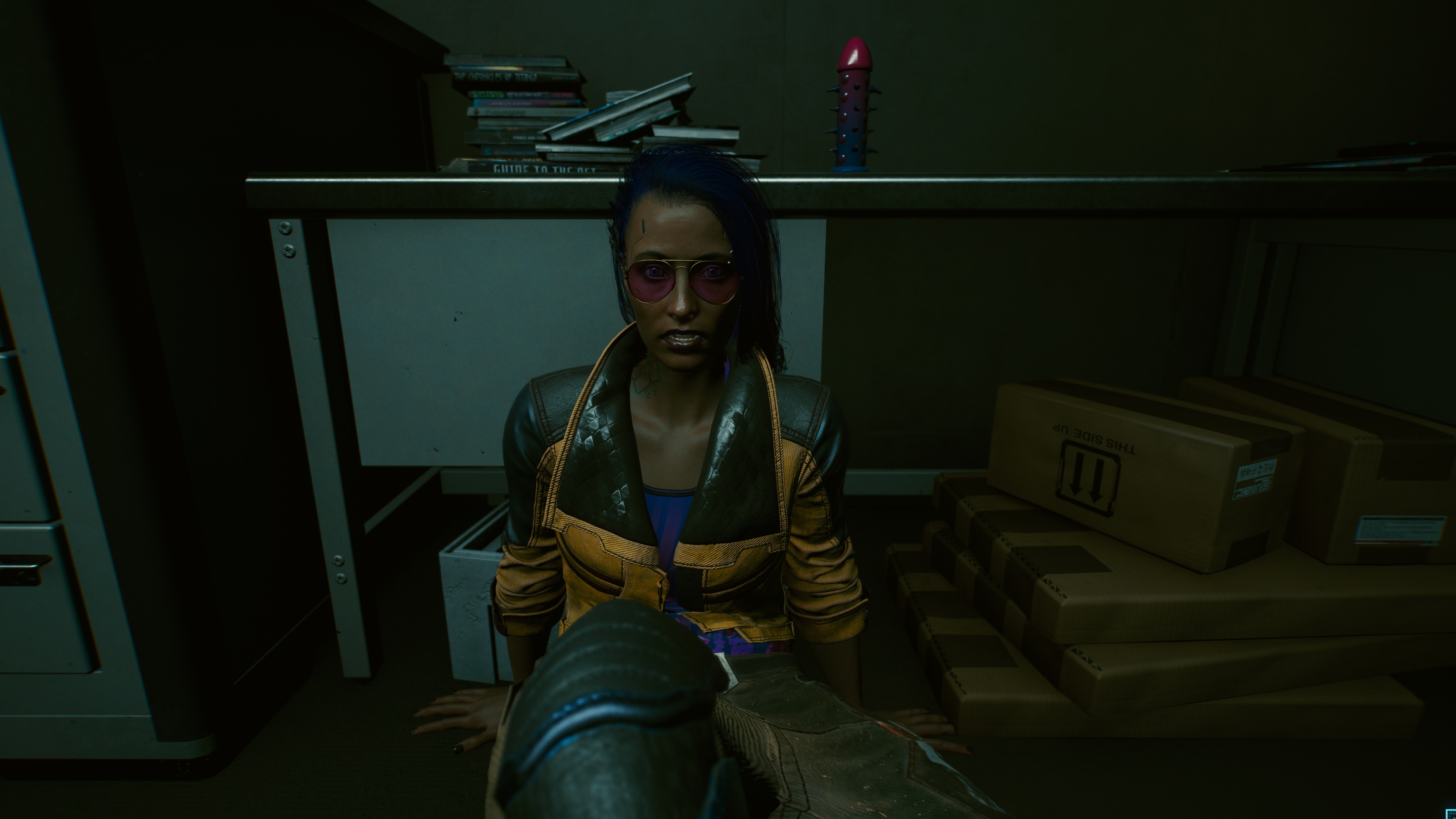 My incredulity at their appearances reached a glorious zenith when I went scuba diving with one of protagonist V’s buddies, uncovering a long-flooded township. I swam down into the underwater ruins of a gas station, and what awaited me on the forecourt…? A Pilomancer 3000, of course. It’s a big one. I pick it up and recycle it into parts to make a new gun. 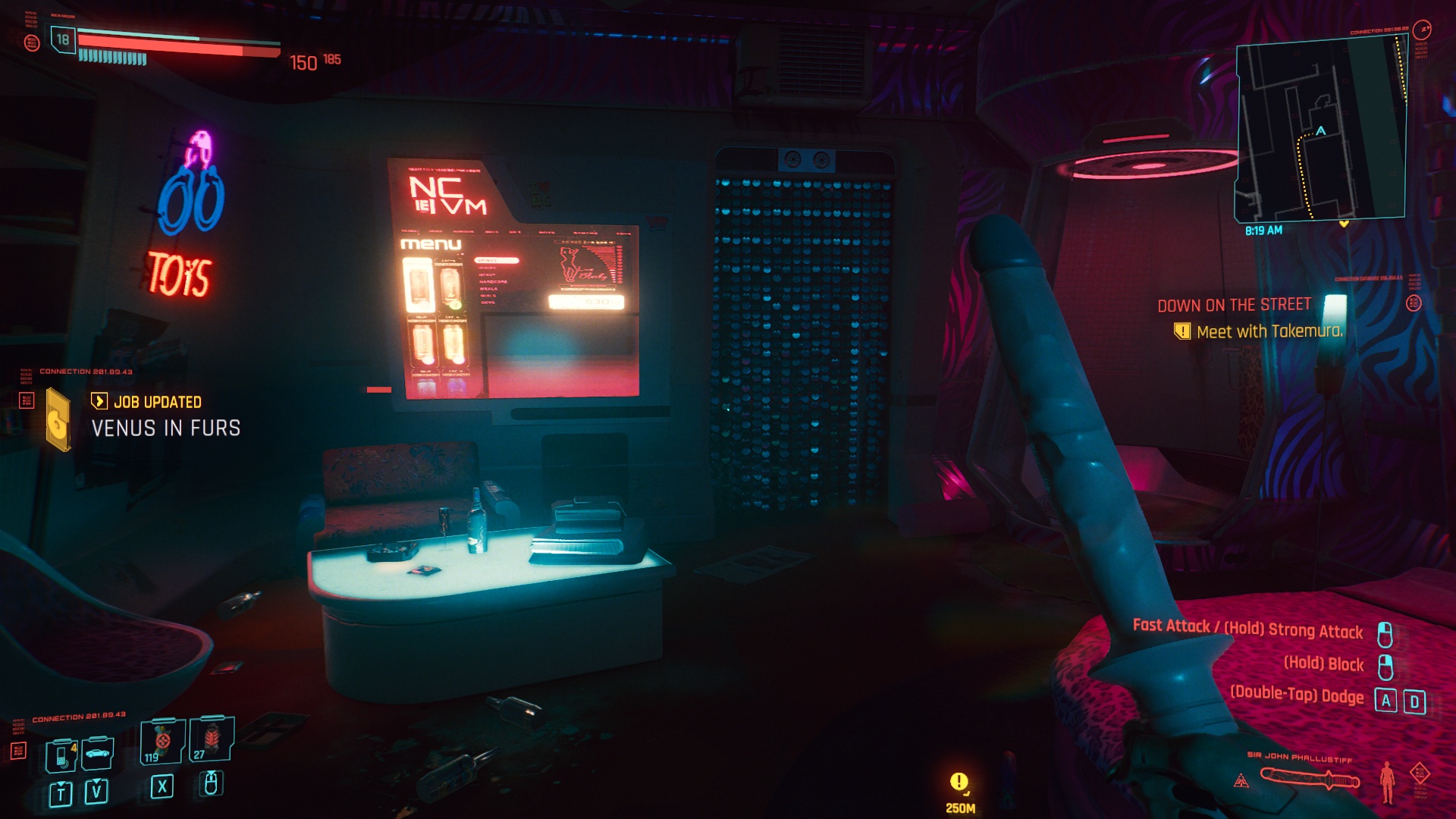 This is funny It makes for great photo mode bait. But also, it’s curious: it tells a bit of a story about CD Projekt’s vision of the decadence of Night City. The number of sex shops per capita in Night City is huge. They’re on every corner. There’s more sex shops than food shops, probably.

This fits in with much else we’ve seen about Cyberpunk 2077, like the over-the-top billboards and advertisements with sexualized images on. In Cyberpunk 2077, sex is used as a shorthand for a world that has spun out of control. There’s no modesty. Billboards feature guys eating ass, or snakes crawling up a naked woman’s leg suggestively. The slogans are deliberately crass.